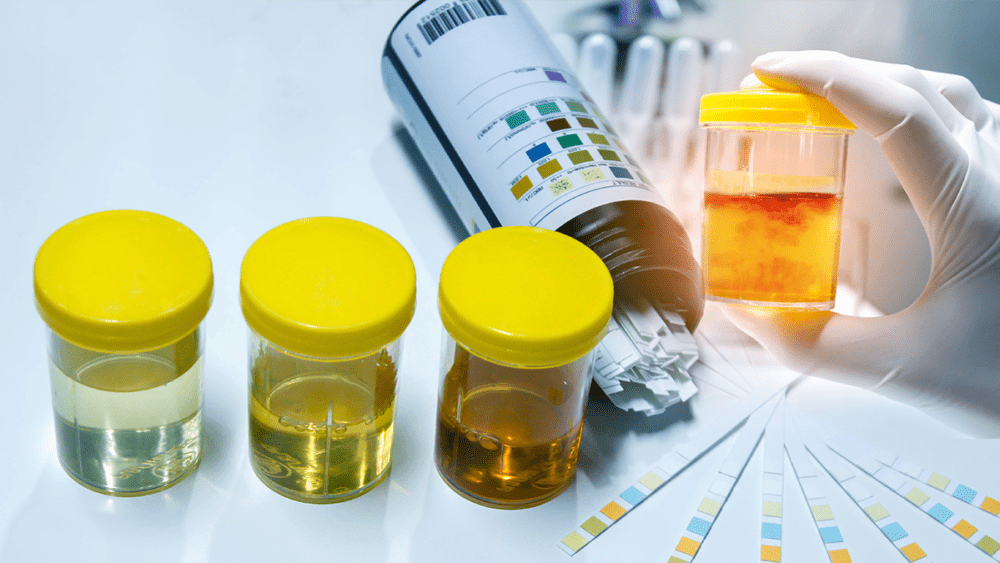 Blood in the urine – Haematuria

Haematuria is the medical term for blood in the urine and it is typically described as being either microscopic or gross haematuria. Gross is a term used by pathologists to indicate something macroscopic, meaning it is visible without the use of a microscope (visible to the naked eye.) This usually refers to instances where you notice the presence of blood in your urine. Microscopic haematuria is the presence of blood in the urine that is not noticeable by yourself, but rather when your physician or doctor has sent a sample of your urine for analysis and red blood cells are seen under the microscope.

Before we go into detail about the causes and evaluation of these pathologies, we first need to understand the anatomy of the urinary tract and exactly how urine is made and transported in the urinary tract. The urinary tract, also known as the renal system, comprises of the kidneys, ureters, the bladder, and the urethra. The main purpose of this system is the elimination of waste from the body, the regulation of blood pH, volume, and pressure as well as the control of electrolyte and metabolite levels. It basically acts as a drainage system with the final product being urine.

The kidneys are the main organs that produce urine, and the rest of the system is concerned with the transportation and elimination thereof out of the body as it travels from the ureters to the bladder and then exit through the urethra. Inside the kidneys are tiny, microscopic filters called the glomeruli and they filter the blood to remove any waste products accumulating in the body. Basically, blood filters through and urine comes out and is then transported to the bladder until enough accumulates until our natural urge to urinate is triggered.

This is a result of damage to the filters allowing red blood cells to leak out of the filters and enter the urine and can be caused by certain drugs, vasculitis (inflammation of the small arteries of the body) and infections like hepatitis or HIV.

These tumours are usually malignant and because they have abnormal blood vessels that bleed quite easily, they can cause bleeding into the urinary tract which then manifests as haematuria.

These are result of salts that condense together and crystalise to form stones that are extremely sharp and jagged. As your body tries to eliminate them, they scratch and tear into the lining of the tract (urethra, bladder, and ureter), causing bleeding and in turn, haematuria.

Haematuria is a known symptom of people suffering from longstanding kidney disease and eventually leads to kidney failure.

These can form in the bladder (most common) as well as the urethra and like the kidney tumours cause haematuria in a similar way as described above.

When urinating, these strictures cause the urine to increase pressure and velocity within the urethra and can cause damage to the lining leading to bleeding and inflammation.

These can happen anywhere in the urinary tract, from the urethra all the way up to the kidneys themselves. As bacteria fight against the body and try to invade your tissues and cells, they cause damage and bleeding to the cells of the urinary tract leading to haematuria.

This is only present in men and is the swelling and inflammation of the small, walnut-shaped gland that produces seminal fluid. The prostate may also be cancerous and can also cause haematuria to present itself. Benign enlargement of the prostate may also occur in older men that causes difficulty when urinating and is age-associated.

This is only present in women and predominantly occurs when the tissues of the uterus-lining grow somewhere else (like the bladder for instance) and as a result leads to haematuria.

This causes bleeding when your body starts fighting itself for whatever reason and the immune system attacks the lining of your tract.

Blunt or penetrating trauma sustained by a person may have associated injuries to the urinary tract that can present as gross, microscopic, or no haematuria.

This manifestation of haematuria results from repeated jarring of the bladder during jogging or long-distance running. This is commonly seen in athletes that participate in extreme endurance sports like cycling or marathons and is a result of micro-trauma to the urinary tract.

Although not that common, almost a quarter of woman can present with microscopic haematuria as a result of sexual intercourse and should always be considered when assessing possible causes. Menstruation is the most common cause of blood in the urine in woman as vaginal bleeding during normal menstrual bleeding is very common and is no cause for alarm as it will normalise without treatment.

Now that we have looked at some of the major causes leading to haematuria, the last aspect to discuss would be the diagnosis thereof consisting of two important factors: imaging and endoscopic evaluation.

Imaging can be performed by the use of a number of imaging modalities, where CT scans (computed tomography) are the best and most common of the modalities used. Others can also be used like MRIs (magnetic resonance imaging) or even an ultrasound, so speak to your urologist about which one would be the best for your situation. Imaging is the best way to evaluate especially the upper urinary tract as it clearly outlines the internal anatomy and helps the physician determine the most probable cause of the haematuria.

An endoscopic evaluation of the urinary tract, also known as a cystoscopy, is a small camera procedure that predominantly evaluates the lower urinary tract. This provides a much better picture than any imaging test as it has the ability to illuminate very small tumours or sources of haematuria.

In conclusion, there are many causes that lead to the presence of blood in the urine where some are benign, and others are more serious and potentially cancerous. Since this pathology has such a wide array of sources and has the possibility of indicating cancer, it is very important to speak to your physician or urologist for a workup, when there is blood in your urine.