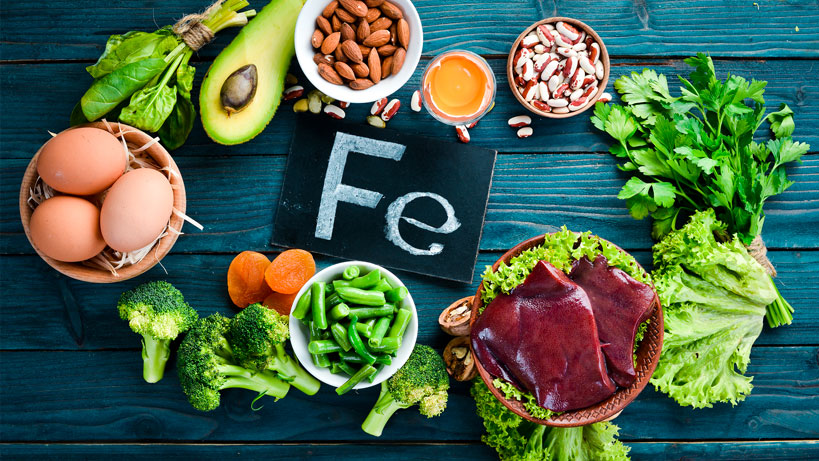 Do you get enough iron?

It’s that feeling again! You are tired to the bone, even more so after climbing a flight of stairs or unpacking your groceries and there is even more hair on your brush than usual. And you just do not have any patience with your family….

Does that sound familiar? Anybody who is overworked or stressed usually recovers after a few days of rest but if you have an iron deficiency, the feeling persists and nothing seems to help.

Iron deficiency is a very common mineral deficiency and will affect about 30 percent of menstruating women across the globe, robbing them of their energy daily.

Iron is necessary to produce a protein called haemoglobin, the part of red blood cells responsible for transporting oxygen in the body. Less iron means less red blood cells and less oxygen. Furthermore, every cell in the body needs iron to produce energy. That is why fatigue is one of the most common symptoms of iron deficiency.

And then there are cravings for certain types of food. Very few health conditions are responsible for cravings, even pregnancy cravings can possibly be attributed to a lack of iron. If you experience symptoms such as headaches, hair loss, brittle nails and a pale skin, then you should consider having your iron levels checked.

Besides fatigue, some other signs of iron deficiency include[1]:

Iron deficiency can be hard to treat and is often complicated by more than one cause. Common causes[2] can include:

Blood loss – From a heavy period, blood donation, or bleeding in the gut.

A diet that’s low in iron – Vegan and vegetarian diets are well-known to be low in dietary iron.

Lack of absorption – Celiac disease and inflammatory bowel disorders can make it difficult for the gut to absorb sufficient quantities of nutrients, including iron.

High impact sports – Runners are famously low in iron (including men) because the high impact of running causes damage to some of the tiny capillaries, releasing a small drop of blood with each step. Over time, it can lead to low levels of iron.

It’s in your genes – Some people were born with a digestive system that struggles to absorb iron.

Iron deficiency is most common amongst women, children, vegetarians and vegans. Women because of menstruation, children because normal growth and development requires a huge amount of iron and vegetarians because they do not eat meat, which is the best source of iron.

Because iron is carried in the blood, you lose iron when you lose blood. A woman’s body can normally maintain a balance between losing some and absorbing some but after a slightly heavier period, she may be deficient and consequently more tired than usual.

Pregnancy is a dangerous time for iron deficient women and their foetuses. Every pregnancy requires an extra 1 000 mg of iron from a women’s body, equivalent to 18 months’ worth of iron absorbed from the diet. Anaemia is quite common amongst pregnant women and can cause further complications should there be a huge loss of blood while giving birth. The iron stores and haemoglobin levels of

pregnant women may not be sufficient to survive huge loss of blood, creating an additional risk at childbirth.

Fortunately this is can be prevented and all pregnant women should have their iron levels checked as rigorously as their folic acid levels. If the pregnant mother is iron deficient in the third trimester, the new-born may be at risk as well.

Although physical signs and symptoms of iron deficiency are not evident until you are already anaemic, you should go for a blood test if you fall in a high-risk group and experience symptoms such as unexplained fatigue, breathlessness and an unusually pale skin. If you are iron deficient and you are not a vegetarian and not breastfeeding, it is important that you find the cause. Males over the age of 50 are especially at risk, as gastrointestinal diseases such an ulcer or cancer might be present. Children with chronic infections or restricted diets, babies who do not get iron-fortified formulas or low birthweight babies who were born early, are also at risk.

Whatever the reason, low iron levels should always be treated. If an iron deficiency is left untreated, it can have long-term health repercussions.

Iron supplementation is readily available and quite effective although relatively expensive. Despite this, there are still many patients that are eventually referred for specialist medical attention. Many patients do not understand that haemoglobin levels and iron reserves can take longer than 3 months to recover and give up if they do not feel immediate results. Gastrointestinal side effects such as constipation also influences long-term compliance. Iron deficiency will unfortunately continue as long as the cause exists. Although blood levels recover quicker, the body’s iron stores may only return to normal after about six months of daily iron supplementation in the average adult. If this does not happen and lack of compliance is not the reason, you should consult with your healthcare provider.

You can prevent iron deficiency by making sure that pregnant women and adolescent girls eat iron-rich food such as lean meat, poultry and fish and food that are good sources of vitamin C to increase the absorption.

The Dietary Guidelines for Americans describes a healthy eating pattern as one that:

Many ready-to-eat breakfast cereals are fortified with iron, and some fruits and vegetables contain iron.