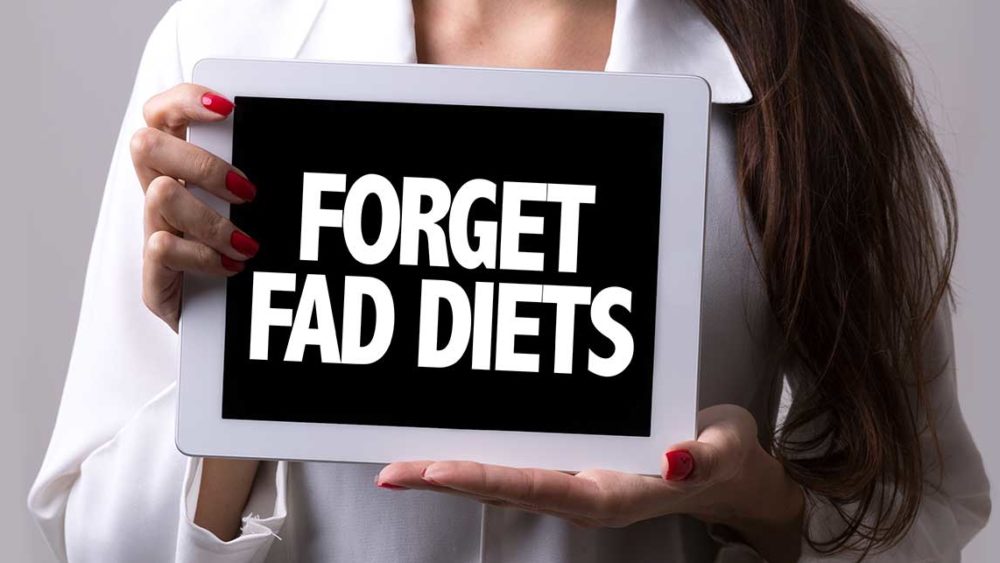 How to Spot a Fad Diet

Dieting seems to have become one of the most popular activities in America. More than 50 million Americans go on a diet each year. Yet, only about 5% manage to keep the weight off over the long run.

Americans spend $30 billion a year on diet products, such as pills, drinks and weight loss programs. Consumers are constantly searching for the “magic diet” — one that will help them lose weight quickly and effortlessly.

The same trend is visible in South Africa and especially just after the festive season. It is very important to remember that fad diets will not only leave you dissatisfied because of weight being regained, but it can also be harmful to your health. Remember that slow and steady wins the race.

What is the definition of a fad diet:  Weight reduction diet that either eliminates one or more essential food groups or recommends consumption of one type of food in excess at the expense of other foods.

Fad diets are recognised by:

Now that you know how to spot a fad diet, the common reply is – but it is only for a short while. Remember that driving your car 1 km extra if it has an empty tank can cause a lot of damage, similarly, following a fad diet can do the same.

Here is why you should preferably not follow one:

1. Not based on scientific evidence.

Many fad diets will claim that ‘science has shown’ or ‘studies have found a link’ – however, anyone that knows the price, process and effort of conducting research will tell you; evidence doesn’t change every month or two. But magazines need to be sold and people are all waiting for the magic cure.  The simple fact that fad diets are not evidence-based is the reason that they are called a “fad” at all, otherwise they would likely be featured in scientific medical and nutrition journals.

As most fad diets promote cutting out whole food groups, this can lead to nutritional deficiencies.

Because our bodies have built-in mechanisms to keep all of its bodily systems stable, collectively called homeostasis, if it is deprived of nutrition your body protects itself by breaking down muscle mass.

Muscle, being more metabolically active than fat, influences your basal metabolic rate and if it is broken down, your metabolism slows down so that it can continue to function although it is receiving less fuel.

4. Fad diets are not individualised

Fad diets promote a “one fits all” approach which doesn’t take into account a person’s medical situation, psychological state or their financial position.

For example, if a person with diabetes started following a fasting diet it could lead to dangerously low blood sugar levels, which could potentially lead to a hypoglycaemic coma.

The very restrictive nature of fad diets makes it unrealistic to maintain for the rest of your life, and when slip-ups occur this can lead to bingeing as a response to such severe limitation. Fad diets promote an “all or nothing” approach which can lead to cycles of purging and bingeing resulting in unbalanced eating habits in the long run.

6. Fad diets can cause disordered eating

Linking with the previous point, fad diets can create an overall unhealthy relationship with food causing people to “food shame” and associate missteps with guilt. Fad diets can also potentially mask or create eating disorders depending on the level of obsession involved, such as “orthorexia nervosa”.

7. Fad diets can be socially isolating

Nourishing your body isn’t purely physical and an essential part of health and survival. Eating and drinking is also an important part of socializing. Having meals with friends or work colleagues can be problematic and may lead to feeling alienated and isolated.

8. Fad diets can be costly

As mentioned above, fad diets can cause a number of health complications such as: nutritional deficiencies, nutritional excesses, interacting with medical conditions, the formation of eating disorders and feelings of social isolation.

Rather opt for a more sustainable, healthier and less restrictive approach, such as a Mediterranean-style diet.

Unfortunately, there is no quick fix, but maintaining a healthy balanced diet by including foods from each food group as well as allowing yourself to have treats in moderation, will result in a much healthier and more enjoyable relationship with food. This will result in much better health outcomes long-term, so skip the fad diets!