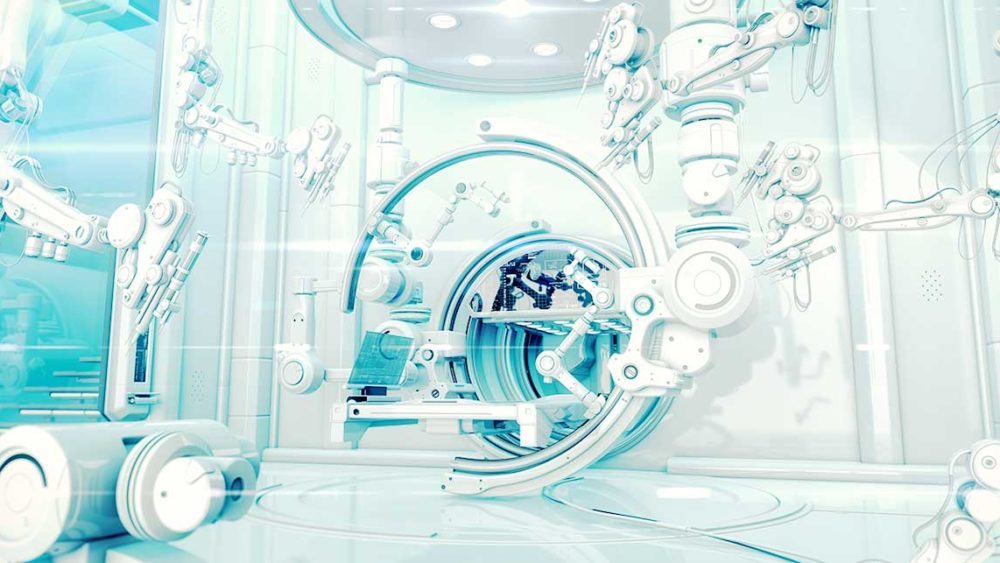 When you walk into a hospital, you receive a dose of sensory overload. First, your eyes are forced to adjust to the cold whites and blues. Then your nose is stung by the sharp smell of disinfectant, and your ears ring with the cacophony of beeping and coughing. The halls which have heard more prayers than church steeples, hold some interesting machines that seem as if they could only be found on the set of a sci-fi movie. Here are some machines found in hospitals, along with their history and price (please remain seated while reading these prices, or it may result in a trip to the emergency room).

Common, but weird nonetheless. A defibrillator is used in the case of cardiac dysrhythmias (irregular heartbeat). It sends an electric current, known as a countershock, to the heart. It is this current which ends the dysrhythmias.

Defibrillators were first demonstrated in 1899 by two physiologists, Jean-Louis Prévost and Frédéric Batelli. They found out that electrical shocks induce ventricular fibrillation in dogs and that larger charges would reverse the condition.

A standard defibrillator’s pricing starts at about R 21,000.00

This machine measures different chemicals and other characteristics found in blood samples. This machine is found to be extremely helpful in the diagnosis of diseases. Several methods of introducing samples to the analyser have been invented. Test tubes can be placed along a rack which move along a course. Some analysers require samples in a sample cup. Samples can be processed singularly, in a batch, or continuously. Cell counter analysers sample, quantify, classify and describe the cell count in a blood sample. Coagulometers measure the ability of blood to clot.

The first haematology analyser was introduced in the 1950s. Before this discovery, cell counts were done manually.

Starting prices of haematology analysers are about R 4 million.

Radiology is the science dealing with X-rays and other high-energy radiation.

Ultrasound is defined as sound waves with frequencies higher than 20 kHz. Ultrasound is used to detect invisible flaws. Acoustic microscopy uses sound waves to visualise structures that are too small to be seen by the human eye. The reflection and diffraction of sound waves can produce information not visible with light.

In 1956, Ian Donald and Tom Brown created the first prototype systems based on a tool used to detect factory flaws in ships.

A standard ultrasound machine starting price is about R 225,500.00

A CT scan uses computer processed combinations of X-ray measurements that are taken from different angles to produce tomographic images (a technique for displaying a representation of a cross-section through a human body or other solid object using X-rays or ultrasound of a scanned object which allows the user to see inside the object without having to cut it).

The first commercially available scanner was invented by Sir Godfrey Hounsfield in 1967, following the patent by Oldendorf for a “radiant energy apparatus for investigating selected areas of interior objects obscured by dense material” in 1963.

A starting price for a CT scanner is usually around R 29 million.

PET is a technique used to observe metabolic processes in the body in order to diagnose a disease. The system detects pairs of gamma rays emitted indirectly by a tracer, which is introduced into the body on a biologically active molecule.

The concept of tomography was introduced by David E. Kuhl, Luke chapman and Roy Edwards in the late 1950s

An MRI machine forms pictures of the anatomy and the physiological processes of the body in both health and disease. MRI scanners use magnetic fields and radio waves to generate images of the organs in the body. What makes MRI different from CT is the fact that it uses ionising radiation. Ionising radiation is made up of subatomic particles, ions or atoms that move at speeds greater than 1% the speed of light.

An MRI scanner generally costs upwards of around R 14 million.

Pulmonary artery catheterisation is the insertion of a catheter into the pulmonary artery in order to detect heart failure, sepsis (the presence in tissues of harmful bacteria and their toxins, typically through infection of a wound) or to evaluate the effects of medicine.

A PAC is also referred to as a Swan-Ganz catheter in honour of its inventors Jeremy Swan and William Ganz. It was invented in 1970.

These are only a few of the interesting machines found in hospitals along with their “cell-shocking’ prices.