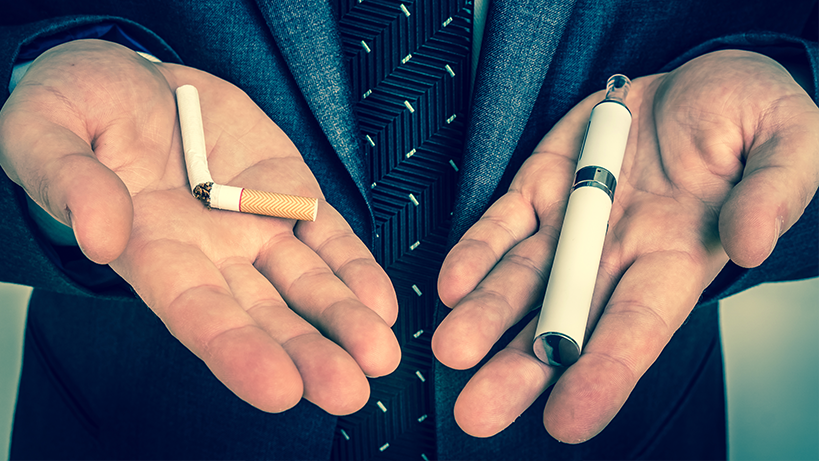 Many smokers have considered turning to electronic cigarettes, which are “vaped” rather than smoked, to help them quit. E-cigarettes are a recent development in tobacco harm-reduction and are marketed as a less harmful alternative to smoking, but a stream of conflicting stories about their benefits has left consumers confused. There is, however, a strong scientific consensus that vaping is far better for health than smoking, although it is best to neither vape nor smoke.

The side effects of smoking:

The side effects of e-cigarette / vaping:

When you add grape to a vape, you are simply adding flavour to it. Although, the flavouring is designed to be ingested and not inhaled, so it can be harmful to the lungs, just like smoking is. The real question is, which of them causes the dreaded “popcorn lung”?

It sounds silly and strange, but “popcorn lung” is a serious lung disease caused by diacetyl, a flavouring chemical found in foods like popcorn. This flavouring is also found in some vape juices. When you inhale vape smoke deeply, you’re allowing diacetyl to attack your lungs directly. This results in coughing, wheezing, shortness of breath and, potentially, Chronic Obstructive Pulmonary Disease (COPD).

Turns out vaping is bad for you, but it’s still the lesser evil when it comes to smoking. Smoking cigarettes is worse for you since your body is exposed to more harmful, cancer-causing chemicals. Although vaping can give you “popcorn lung”, cigarettes can give you “black lung” (lungs that are black instead of pink), which can ultimately lead to you suffocating to death. Although “popcorn lung” is irreversible, vaping has comparatively more benefits than smoking does.

E-cigarette/ vaping is potentially the healthier option but are they healthy? The e-liquid solvents like propylene glycol and glycerine, and certain flavouring agents that are safe to eat but may be problematic when heated and inhaled, and which metals are coming off a device’s heating coils. E-cigarettes are likely less carcinogenic and heart hazardous than cigarettes, but the effects of long- term use on the lungs remain an open question. Most people just think about the e-cigarette as kind of like a cigarette, except it doesn’t have as much bad stuff in it. But when you heat it up, you just get a whole different mixture of toxic chemicals.

There is some concern that e-cigarettes are being marketed to attract younger non-smokers with “flavoured” liquids such as bubble gum, piña colada, vanilla, and others. Because most e-cigarettes contain nicotine, it is possible that people can become addicted to them. Some doctors are concerned that if they become addicted to the nicotine in the e-cigarettes, it may be an easy step up to smoking tobacco, which is associated with many health consequences.

And what if you have not tried any form of tobacco? Just say “no”, full stop, to both vaping and smoking, say “no” to the unpleasant smell, to the unnecessary expense, to the increased risk of disease.